Adam Z is a man of many interests that takes pride in the place where he lays his head. As you read on you will see how Adam incorporated his personality into his Southern Bachelor Pad, and we hope that you find some inspiration along the way.

Let me tell you a little background on myself before I start describing my Bachelor Pad. Like any other respectful bachelor, my place reflects myself and my interests. I live in Southern Virginia, a place called Danville to be exact. In my free time I play lots of sports, hunt, fish so of course I love the outdoors. I have worked in stock car racing for most of my adult life. For 7 years I was a member of NASCAR – an over-the-wall pit crew member, also known as a ‘jackman’. These facts about me will be relevant later. Let’s move on to my Bachelor Pad now.

My place isn’t done yet – which is why this is part 1 of maybe 2 or 3 parts in the future. Long story short, I decided to move into the river district in Danville Virginia. My buddy showed me some new place being built, and the one I chose is apparently the biggest one bedroom apartment in the small city. Great, right?!? Yes and no. When I moved in I had nothing so the reality hit me that furnishing the place was going to be costly. However as I found out, if you keep your cool and don’t rush your purchases you can make your Bachelor Pad nice and do it at reasonable prices. 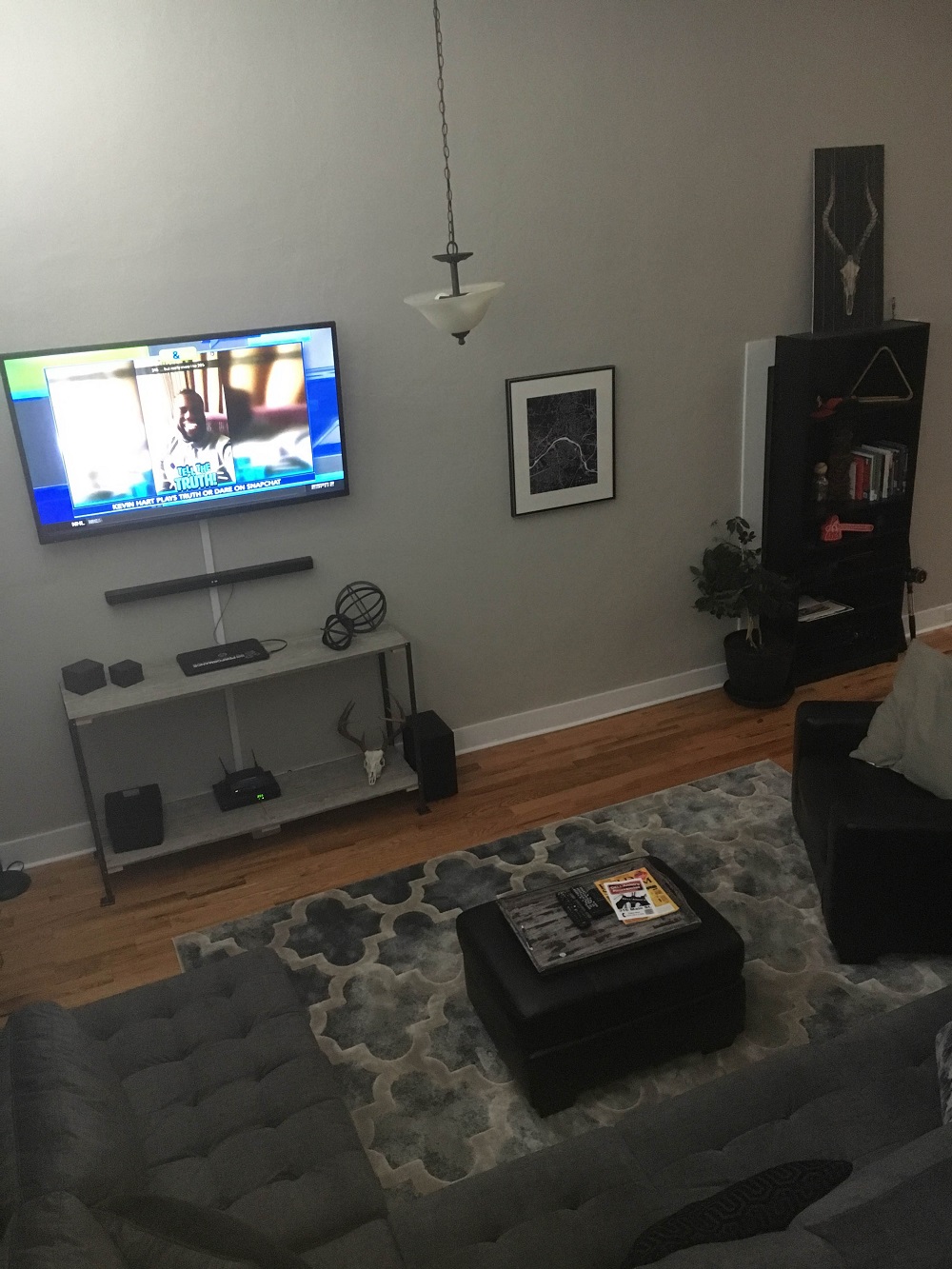 Let’s start with the living room. The day before I signed the lease, I found a 60 inch flat screen at Wal-Mart for $300. It looks and works great, and most importantly saved me about $1000 which I didn’t have to spend. I have 15 – 20 foot ceilings so a big TV is a must or it would look disproportionate. The Samsung sound bar mounted underneath was also bought discount. It came from Sam’s Club for around $70. I constantly check out the “out of box/display” section in the electronics at that place.  Everything they have is in good working order but usually just doesn’t have a box. Well worth checking out once a week. The console stand under my TV was made by me for around $40. It’s made from some angle iron and barn wood bought from home depot. It took about an hour. The book case was second hand (free) from my sister and yes, I keep books on it. Every guy should keep books on his shelf and read at least one of them (or the back) so if your lady friend comes by and gets nosey while you’re in the bathroom draining out some of the night’s earlier drinks you won’t look like a deer in the headlights when she asks you about the book. I also keep a bunch of random items on my book case but I keep it simple and try to present it all well. Some examples are a local minor league hat / foam hand out, a weird tiki totem pole, books, a change jar, my pool rack and a rustic antelope that I found at hobby lobby – I try not to clutter it. I also keep a plant beside it and I keep it alive! Don’t do fake plants – you’re not furnishing a doctor’s waiting room. The chairs at the counter are from a yard sale across from my parent’s house, I scored them for $20. 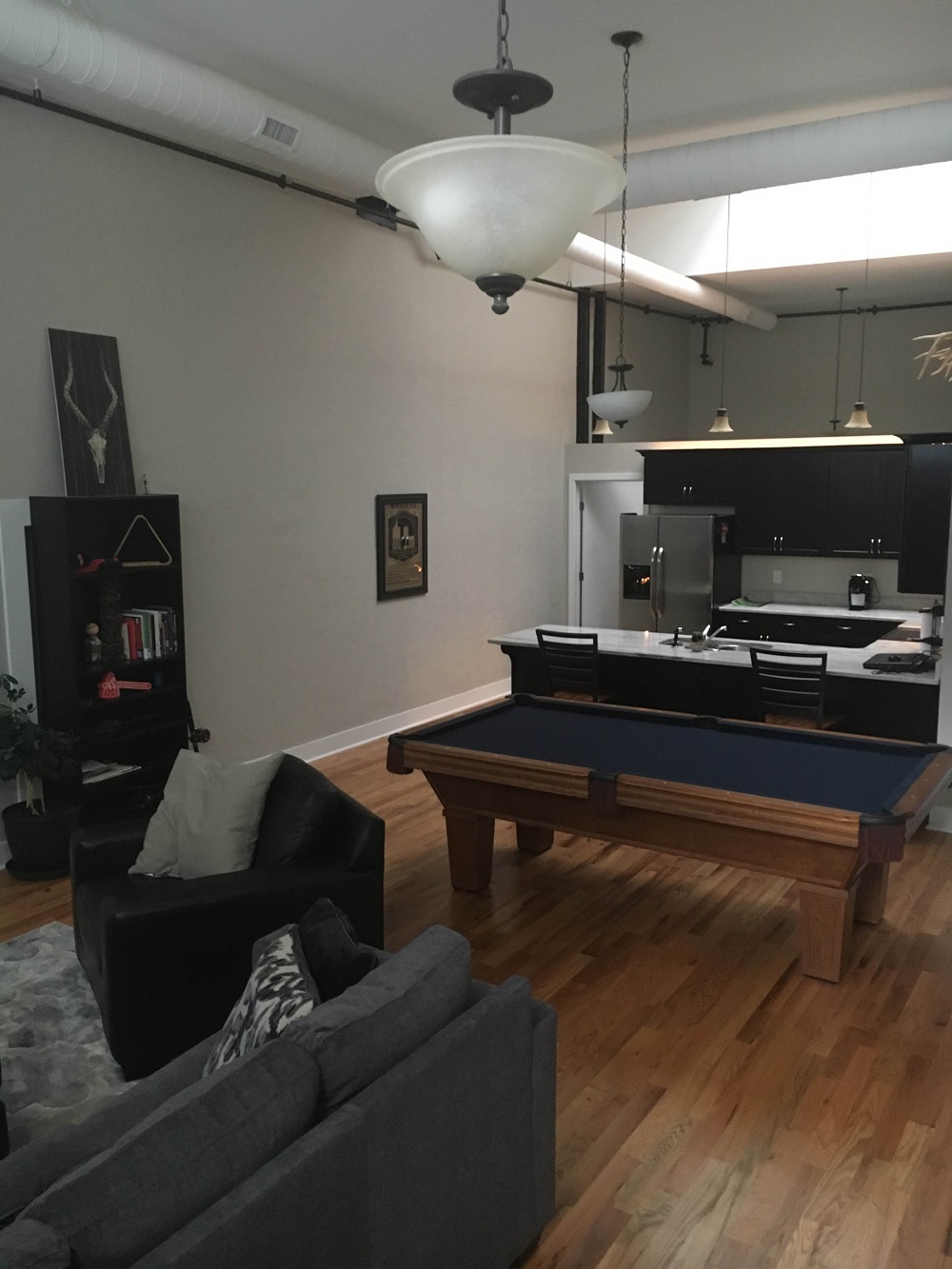 Okay let’s get to the sectional sofa.  It wasn’t the cheapest, but once again the couch in your place is a piece that needs to last and look really good because everything else reflects off of it.  If your big ass couch looks like shit then I don’t care if you’re in the Taj Mahal it will look like shit too. I got this sofa from the Ashley Home Store.  I can’t remember exactly what I paid for it but I do know I had to wait for about a month to get it and that’s cool. NEVER RUSH putting your place together or it will look like shit.  do remember that I was able to talk them down on the couch and got the chair and ottoman on clearance – don’t be afraid to bargain when furniture shopping. The sectional is a slate grey color and the ottoman and chair are black.  Don’t get everything the EXACT same style and color. It just looks weird. I don’t know why but it does. The sectional came with the white and navy blue pillows, so I needed an area rug with the same colors. With that said, I wanted to avoid too much white because I know that one of my friend will spill their whiskey drink on it and ruin it. I found a rug for 50% off at a place called the At Home Store for around $150. 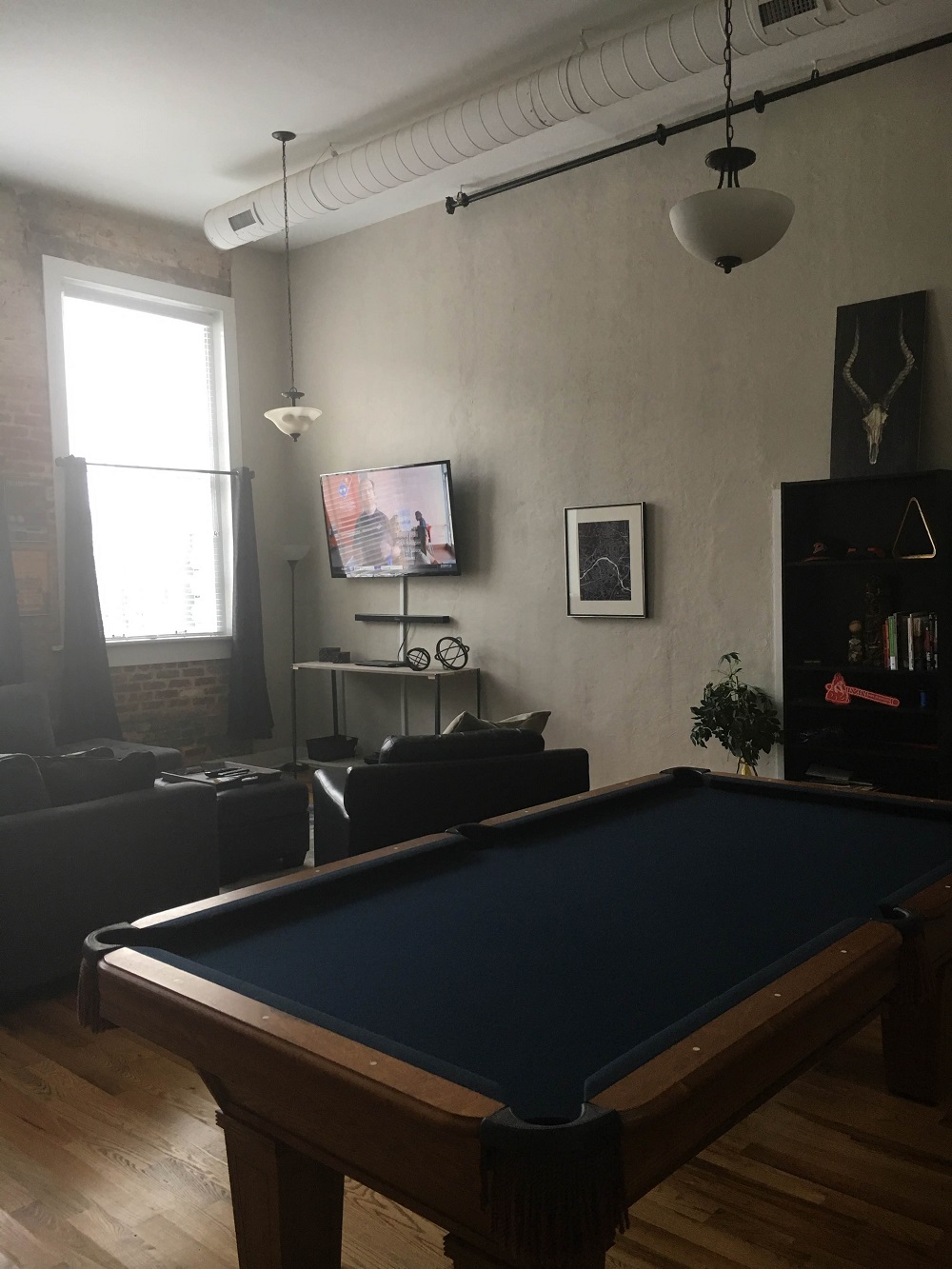 After all this I was still left with a large space between the sectional area and the kitchen. The thought of a big table was thrown out there but I decided not to go that route because I’m not sitting down for an imaginary family meal.  A pub table does the trick along with my long counter top. So what else should I do? Oh yeah a pool table!  This proved harder than you would think.  You can’t get too small or too big when it comes to pool tables.  We played a lot at the local sports bar so I literally walked in with a tape measure and checked the size, which was 7.5 feet. Perfect! I surfed craigslist for a month for the perfect table. I saw a few but I wanted a 7.5 foot table with navy felt. I know it’s picky, but you should be too with all your stuff (while also trying to save money).  I found one from a couple that was moving away from a lake in North Carolina. It was rough picking it up because I had no idea what I was doing. Also, did I mention that it was up above a garage in some sort of guest room? My dad helped and we made it happen in 100 degree heat. Within 5 hours we had it up and we were playing on it in my place. It sets the place off and we play on it before we go out at night and on game days. It is a great investment. It is also helpful for inviting girls over because 9 times out of 10 they want to play and ask me to show them how. 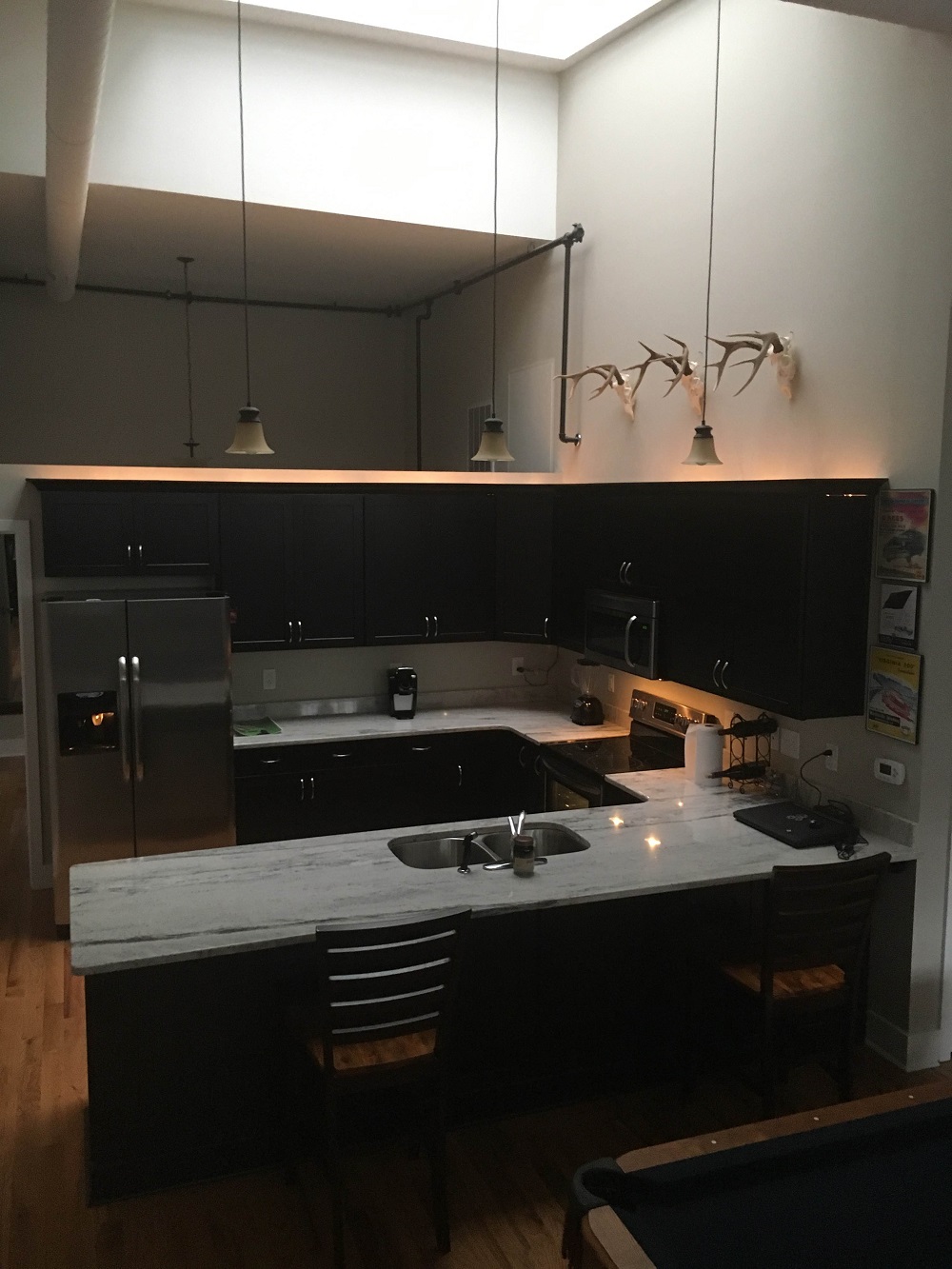 Now for the odds and ends. Everything should be placed where it fits in – colors shouldn’t be that far off but I will say on smaller items some off bright shades can help. This is where your personality comes in the most. Since I worked in racing, I searched high and low for old NASCAR program covers from way back in the day. I found 3 from some local tracks such as Martinsville. I also found an old moonshine poster with a modern touch to it (moonshine is prevalent here in Southern VA). I also found the print of a street map of Danville. Other small things on the wall include some posters from car movies. Rule number 1 of these minimalist posters is: get them framed! This isn’t college anymore where we used thumb tacks to  hold up posters over the kitchen table. For smaller stuff, a cheap frame can work but I keep it simple. Bigger frames can be found at specialty shops or local frame stores. I try to support local businesses wherever possible, they do great work and are often surprisingly cheap. My pool stick rack is mounted to the wall.

As far the kitchen goes, invest in some wine and put a small wine rack to keep the bottles in. Whatever you do, don’t display your finished liquor bottles. You look 16 if you do that. Wine can be for you but I keep it for the girls. Don’t leave your protein powder out because no one cares what supplements you are taking. Invest in some sort of coffee maker. My sister got a new one and gave me her old one so the word there again is FREE. If you have a girl over, chances are she will want coffee in the morning. Curtains are a must or your place will look unfinished. You can get them for cheap, but make sure the curtains match. I also have some of my deer skulls from hunting displayed in a tasteful way. Most of the other items that I have sitting around came from Hobby Lobby – not a bad place to find some women might I add. Keep your fridge organized, I get more compliments on that than anything else! Candles are also a must. Go for some manly candles, for example a whiskey or tobacco scent is masculine. 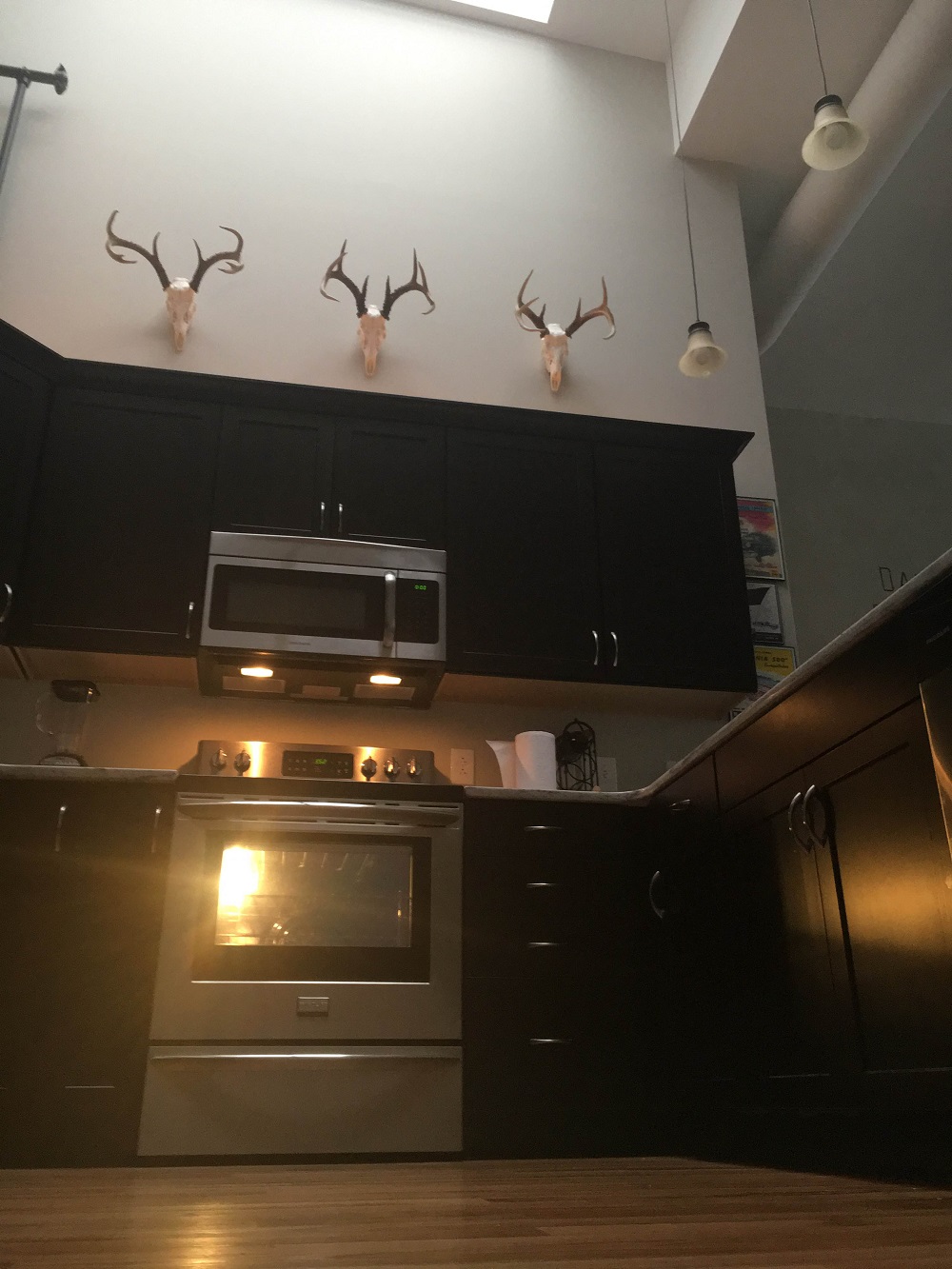 In my next post I will give you a tour of my bathroom and bedroom. When having lady friends over, the bathroom is of the upmost importance. One girl told me that an unkept bathroom is basically a deal breaker – trust me guys, they notice these things. If you have any questions feel free to contact me at [email protected] and I will be glad to help out a fellow bachelor. To summarize, here are some general rules I would recommend for your Bachelor Pad:

1. Don’t rush your purchases
2. Keep hunting for bargains
3. If you can’t find it reasonably priced, try and DIY – there are articles everywhere
4. If you are having trouble finding something, chances are it is overkill or you don’t need it
5. Keep your place neat and clean (obviously)
6. Everything has it’s place – make sure that is where it is kept
7. Stay humble about your place – but don’t be afraid to invite others over. The element of surprise always works.